Sol LeWitt’s first wall drawing dates from 1968 and was created in the Paula Cooper Gallery in New York. Creating a wall drawing was a sudden, radical, but for LeWitt logical switch from three-dimensional to two-dimensional. He had suddenly found a method whereby he could escape the limitations of paper and canvas, but even more importantly he could work directly on the wall (or floor) without the intervention of a support (canvas or paper). In his own work, he thus changed the role of drawing as a modest medium into drawing on a large scale in architectural spaces.

He also changed drawing’s significance as the most intimate form of artistic expression, as Sol LeWitt did not execute his wall drawings himself. They were carried out by a team of assistants, albeit in accordance with the artist’s strictly set methods and designs. The most important thing is that the personal style of the makers was made as anonymous as possible, and over the years his crew developed all sorts of complicated techniques for doing so. Of course, every execution is different in appearance to the previous one, as the group of assistants inevitably put their mark on it, but this was not a problem for the artist, as long as the team kept to his guidelines and did not try to make it into a different art work. Sol LeWitt himself said that he saw it as a collaboration between the artist and the makers, comparing it to the performance of a piece of music. It is their interpretation of his work. 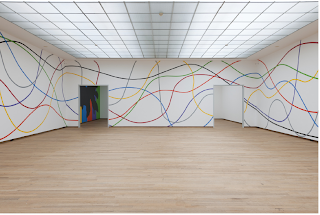 Executing the wall drawings demands a lot of time and patience. The walls are carefully prepared and given the correct ground coats. The acrylic or latex top coat is applied in several layers using a special technique of crosswise brushstrokes. Lines and areas are marked with tape, and then paper templates are used. It is an extremely labour-intensive method that must also be executed with great precision. The paint layers are built up in a way that no differences in thickness are visible, and the final result must be completely flat.

The generation to which Mangold belongs is influenced strongly by the Abstract Expressionism of artists such as Barnett Newman. Movements like Minimal and Conceptual Art arose in reaction to this.

In his work, Mangold has always adhered to the same strict formula of striving for a balance between surface, colour, line and form. His work is characterised by his use of the ‘shaped canvas’. The artist, however, regards his works as paintings rather than objects, even though he claims not to be interested in painting techniques. Mangold starts each of his works by drawing quick sketches, in which he makes the most important decisions intuitively. The best ideas are developed on a larger scale, in graphite and pastel on paper, after which several versions are created on canvas. In pencil on the shaped canvas, he creates a grid structure, which he uses to draw the thicker lines: ovals, waves, scrolls and circles. The lines appear mathematical in the precision of their execution, but from close up you can see that they are drawn by hand, over and over again until the right thickness has been achieved. The element of line – linear configurations drawn in pencil – is as important in his work as colour. To emphasise this, Mangold opted for the visible pencil line rather than the line drawn in the paint layer, in which the line is part of the paint and not an autonomous form. In his early works, the linear image was determined only by the dividing line between the panels. Although colours play an important role, they are inconspicuous and neutral, and expressly in balance with the shape of the canvas. In order to restrict the personal touch as far as possible, the paint is usually applied with a roller in several thin layers.

Although Mangold’s works can be taken in at a glance (something the artist aims for), they only fully reveal themselves on longer contemplation. There is a paradox between what is there and what is not there, and a role is also played by the remaining space between the panels and the recesses. 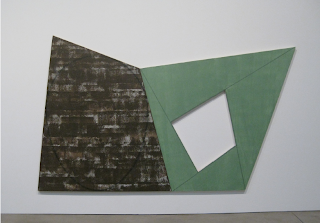 Bruce Nauman is one of today’s most important artists. Early on, he abandoned painting and began a restless investigation into the possibilities of sculpture, performance, installations, film, video, photography and neon for his work. Ideas from other disciplines, like literature, dance, music and theatre were to play an increasingly important role in his art. Nauman was a pioneer in the field of video art. The series of early videos from the 1960s, in which he filmed himself carrying out absurd and pointless exercises in his studio, are considered particularly ground-breaking. He has never imposed any limitations on himself, executing every idea in the most suitable medium and always searching for new visual possibilities. Right from the start, Nauman investigated serious themes like the human condition, and his work plays with language, humour, irony and meaning or contradiction.

For the neons, Bruce Nauman made sketches in pencil, charcoal and watercolour. For the figures, he used the outlines of the bodies of himself and his wife. The double outlines in different colours indicate where neon is to be used, and the layered figures indicate how they will appear when the neon flashes on and off. The primary colours red, yellow and blue are used for the male figures, while the female figures are represented in softer shades like pink, green and orange. The timing of the sequences is very important and is fixed and repeated in a continual loop, each figure having its own individual programme.

Though neon light is immaterial, it draws attention immediately, completely dominating its environment and attracting through its warm glow and intense colours. The same applies to Nauman’s neons, despite the unsettling message they convey. Conflicting signals are given simultaneously in a deliberate attempt to arouse confusion and unease in the viewer. 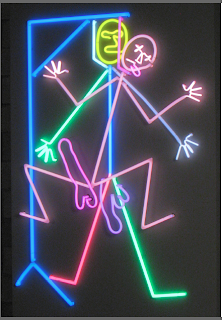 Serra’s drawings are not sketches for his sculptures, but autonomous works of art. Although he has been drawing since 1972, his first solo exhibition only came in 1974, at the Leo Castelli Gallery in New York. Originally, he worked in charcoal, but switched to paintstick from 1973. He developed his own procedure for making large blocks of paintstick (a mix of oil pastel, tar, beeswax and resin), which enabled him to work large surface areas with a single movement. It is a heavy, physical, repetitive way of working, in which the linen or paper is covered with the paintstick. Besides physical strength, it also demands great concentration. The layers are applied from the centre; first horizontally and then vertically, crosswise, until the black has enough absorption and the structure of the linen becomes visible. This material quality allows people to experience his drawings as an object rather than as a flat surface, which is what they actually are.

Unlike colour, which reflects light, black absorbs light and therefore gains weight and gravity. This affects people’s physical experience on entering a room where Serra’s works are installed. The heaviness of the black areas affects the perception of scale, and of the interplay of lines and the specific shape of the linen.

At his big exhibition of drawings at the Bonnefantenmuseum in 1990, Serra remarked, “The only way you can place a weight within the confines of a given space is by defining the form of the drawing in direct relation to the floor, wall, corner or ceiling of the room. In this way, a space or location can be marked out within the architectural framework that differs from the architectural intention. The black installations have succeeded only when they have brought about a change in the architecture on the flat surface. In doing so, illusionist strategies must be avoided. The black shapes, which function as weights within a given architectural space, create new spaces and locations within this space, resulting in a dislocation of spatial experience”.

Richard Serra is known mainly for his large-scale sculptures in Cor-ten steel, which are constructed in such a way as to sound out the limits of the laws of gravity. 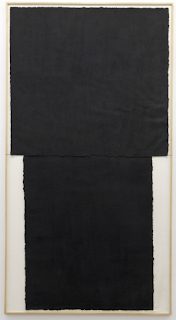