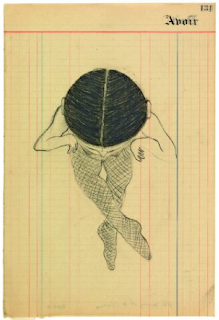 Sandra Vásquez de la Horra is her name. She has Chilean nationality but has been living in Düsseldorf since 1995. Her work is 'modest'. It is small-scale and concerns drawings. But, good heavens – when she hangs those drawings on the wall! Then they become part of a greater whole; a chain that can stretch over the entire wall. Her world is populated by bidden and unbidden guests. She welcomes them in, without respect to persons. It must be said, however, that once they are caught in her net, there is no escape. Everything and everybody is 'sealed' beneath a thin layer of beeswax, which is applied over all the drawings. Something that was initially fluid and therefore malleable suddenly appears unmanageable; in readiness for eternity.

Sandra Vásquez de la Horra's cultured and sophisticated art, while thrusting its roots down into South American origins, is nurtured by a rich and varied visual culture as well as an in-depth knowledge of European and South-American literature, philosophy and anthropology. Italian culture left a deep-seated mark on her; its great classical authors, such as Dante, and its artists and architects –Leonardo da Vinci, Michaelangelo, and Palladio – figure among her references. She read André Breton, Tristan Tzara, Charles Baudelaire and Arthur Rimbaud, and particularly liked Paul Eluard. She later discovered North American literature, Walt Whitman, and the writers of the beat generation: Allen Ginsberg, Gregory Corso, Lawrence Ferlinghetti and, later, Jack Kerouac.

Sandra Vásquez de la Horra always drew. Her radically figurative drawings are never "beautiful" in the classic sense of the term. They have a rough, immediate quality, a sense of urgency to them. They feature many personal elements. Since 1997, the artist finishes her drawings by dipping them in wax. This treatment gives her work a unique materiality and endows the pencil line with ambiguous depth. The wax serves as a translucent skin, providing a patina to the drawing that transports it to another time.

The artist readily uses a variety of paper qualities and colours, and is particularly fond of accounting pads with columns marked by red lines. As a result she can use old paper, often of mediocre quality, which she enjoys rummaging around for at flea markets. Her line is fluid, firm and applied in an unbroken movement. The shapes are often filled in, as if "coloured in" in graphite, in a wide variety of greys and blacks, and sometimes, though rarely, set off by a touch of yellow, pink or red.

Each of her drawings is a work of art in its own right, telling a particular story and revealing a particular soul, but Vásquez de la Horra likes to arrange them to form large wall installations comprising up to a hundred pieces at times of a variety of sizes. The setup is temporary, susceptible to being modified for a given space. It requires an attentive gaze and an intuitive sense on the part of the artist to produce a narrative structure that is strictly speaking storyless yet imbued with a humour that is at once exuberant, baroque and filled with acuity.

Typography is widely present in Sandra Vásquez de la Horra's work. Many of her drawings combine figure and writing, with the latter changing the import of the picture. She likes to use capital letters, small and large, that she lays out as she wishes with no regard for correct grammatical breaks, thereby producing surprising words, charged with new meanings. Sometimes the artist allows the words to take up most of the space, dominating the motif and becoming the real subject of the drawing. It is tempting, in particular in the German context, to compare her way of working with language to that of the great masters of subversion of words and letters from the Dada period, Kurt Schwitters and Raoul Hausmann in particular.

In relation to her anthropological studies, myths and popular tales are at the centre of the artist's concerns and provide her with the subject of many drawings. Religion and sex are also major themes in her work. She takes up as subjects the Sacred Heart of Jesus, the Immaculate Conception, as well as saints, such as Lazarus and Sebastian. As for sex, it's treated very naturally and quite casually. Politics is also an important component in Vásquez de la Horra's world, although it tends to play a latent role.

Vásquez de la Horra also participates in the tradition of a great family of artists, one of whose ancestors are Goya and Redon. Some of her figures, particularly their faces, seem to be a discreet, vibrant tribute to the great 'master of blacks'. Like Redon, Vásquez de la Horra has a pronounced taste for the strange and the morbid. And like him, she has a predilection for skulls, hanged bodies, ghostly apparitions, and the figure of Saint Sebastian that Redon drew and painted often. She has managed nearly imperceptibly in her work to retranscribe this influence in her own pictorial idiom. 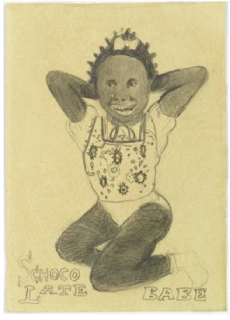 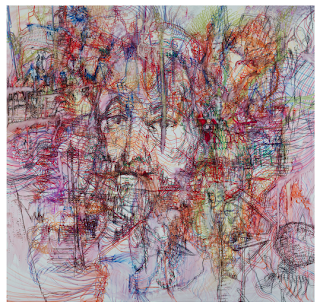 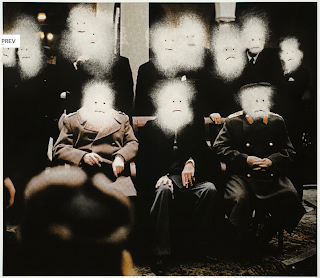