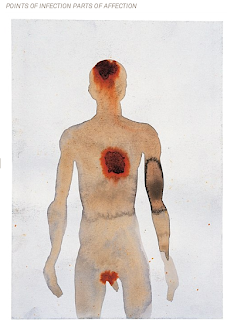 Currently at the Museo d’Arte Contemporanea Roma (MACRO) until February 6, 2011 is an exhibition entitled Drawing Space. In the exhibition, artist Antony Gormley displays what appears to be an evolution of his artworks on paper. He also explores the relationship between his drawings have with the development of his sculptures. The show presents drawings and sculptures which demonstrate how line has migrated from the surface of the paper to physical architectural space.

The exhibition shows Gormley’s drawings from 1981 which are very diagrammatic. The artist created these drawings with black oil paint and charcoal, and then pinned paper to the wall. The exhibition then continues with the night landscapes of the 1990s, and concludes with the most recent linear works.

One particular piece that stands out and did a successful job with representing the concept of is entitled “Mansion”. The artwork is a visual metaphor for the interconnectivity of lines in a mundane drawing or sketch with an actual structure. Although the viewer sees a mere drawing and not a tangible sculpture, we can conclude that both a three dimensional (sculpture) and two dimensional (sketch) are present in “Mansion”.

When we look at the piece we can see that inside of the larger human being there is smaller individual. This inner human may serve as symbolic icon of a two-dimensional sketch; the smaller idea. The larger human represent the actual sculpture as the big idea that could not have existed without a blue print of the smaller idea (the sketch). In vice versa, the correlation between line and space is also vivid in these piece in the way that one cannot sketch a sculpture if the does not exist, and one cannot make such an accurate sculpture without the pre-planning of a sketch. Both three dimensional physical space and flat two dimensional surface space rely on each other in order to create some sort of final artwork.

Another work of art that also complies with the artist’s theme of the migration of line to a physical space from flat surface can be seen in the photo below. At first glance, the sculpture can be described as what appears to be static. There is no clear indication that helps the viewer decipher the image of the sculpture.

However, through a closer look at the structure we can see that there are smaller rectangular objects that contribute to the entirety of sculpture. While the overall contour of the sculpture itself is in a way robust, the details that contribute and make up the sculpture are very linear. Without the linearity of the details the sculpture would not exist in three dimensional space. Through this work of art Gormley provokes the idea that lines gain a sense of relief and freedom away from the weight of description. In other words, line is detached from the burden of having to create a clear description of a recognizable image. Furthermore, the linear qualities of the sculpture create an energetic atmosphere which gives life to the sculpture and helps activate the viewer’s recognition of space. 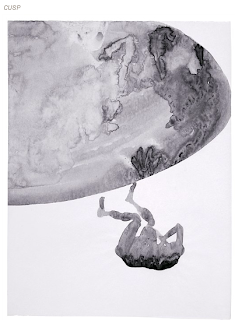